One of the questions I get asked the most frequently is what I am currently reading.  Because of this I have decided to to do a blog post every week where I will go over the books that I have read that week.  I don't want these posts to be criticism so due to that fact there may be weeks where I don't do a post as quite frankly, there are weeks that I don't like the things that I have read.  This week I read issues #1-3 of Infinite Kung Fu and the Trilogy Tour II one-shot. 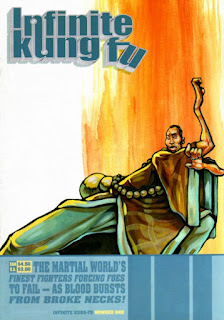 One of the greatest things about being a comics reseller is that I am rarely without something to read.  Infinite Kung Fu issues #1-3 was found in a collection that I bought earlier this year.  The issues are slightly smaller than standard comics size so as I was sorting everything out I pulled these and set them on top of another box to keep any damage from occuring.  I didn't give them much thought after that until a few weeks ago when I was recording a podcast with Darkslinger Mafia co-host Robert Diaz.  Robert often goes through the boxes that I have stacked in my room (one of his most annoying traits).  He picked up an issue from this series, flipped through it and then quickly discarded it with the comment that he hated the art.  Robert likes his art fairly straight forward.  I enjoy all types as long as it is in service to the story.  Later that night I picked up issue #1 of Infinite Kung Fu from the stacks, flipped through it and decided to give it a read.  The artwork reminded me of Adam Pollina back in his X-Force days.  I found myself reading the 3 issues that I had that night and loved every minute of it.  The story is about  Lei Kung, a soldier who goes AWOL in a post-apocalyptic zombie filled future.  He accidentally burns a monk, not realizing that the monk is actually meditating.  The monk uses Kung Fu to take over the body of a nearby zombie and starts training Lei Kung in the ways of kung fu.  This isn't the standard kung fu that you would find in the real world though.  The kung fu in this story is more reminiscent of what you might find in Nartuo.   The dialogue in these issues is extremely well done, the plotting is fantastic and the artwork fits the story perfectly.  My only complaint is that I don't have the rest of the issues, but I will be fixing that soon as I will definitely be buying the collected graphic novel for this series. 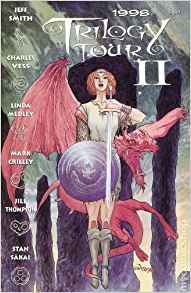 Trilogy Tour II is something that I recently came across while digging through 50 cent bins at a local comic convention.  I saw Jeff Smith in the top left corner and immediately purchased it.  I have been planning a large cross country tour for Darkslinger Comics for years and this book has inspired me to do something similar to this when that time finally comes.  This is an anthology title that introduced readers to the characters of each of the creators on the 2nd trilogy tour.
The first story is a short featuring Rose by Jeff Smith and Charles Vess.  I have read this story before in the Rose collected editions but it was great to revisit it.  If you haven't read Rose before, it is one of the companion pieces to Bone.  It features the same great story telling by Jeff Smith that you would find in Bone with fantastic illustrations by Charles Vess.  Reading this made me want to dig out my Rose collection and give it a reread.
Next up was Castle Waiting by Linda Medley.  I have the collected edition of this title but haven't given it a read.  After reading this short I have now added it to the books that I will be reading.  The story involves a nun having a pick nick with a demon at a grave yard.  The nun is apparently from an order that deals with the supernatural and doesn't appear to be directly connected with Catholicism.  While there isn't a ton of information given in this short, there was enough to make me want to continue reading this story.
Next was Scary Godmother by Jill Thompson.  This was a fun light read about a group of monsters having a tea party.  Of all of the stories in this collection, this was the one I liked the least.  It was a well told and well illustrated tale, I just don't think that I am the right audience for this comic.
The next story was a great treat.  It was an Akiko short by Mark Crilley.  I absolutely love Akiko and had never read this short.  Akiko is a story about a young girl that goes on intergalactic journeys with her strange, alien friends.  This story is about Akiko and Spuckler searching for their missing friend, Mr. Beeba.
The next tale featured Usagi Yojimbo fighting a samurai over the right to cross a bridge.  Like the Rose story I have previously read this story but like the Rose story I enjoyed revisiting it and much like Rose, it made me want to reread my Usagi collections.
The last tale is a 2 page Bone story and is the only short that is featured in black and white.  Just like with Rose and Usagi, I have read this story in the past.  But just like with those 2 I had no problems with revisiting it.  This story involves Smiley and Phoney having a conversation regarding greed while cleaning dishes.  Keep this book in mind the next time you are digging through the cheap bins, it is a fun read that features some of the greatest characters and creators to ever be featured on the comics page.  I highly recommend it.
Posted by Adam Watson at 4:16 AM