Darkslinger Comics and Azurek Studios present Zombie-O-Rama, the Who Will Save the World? Pin-Up Contest. 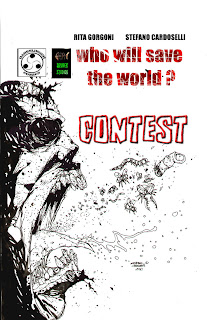 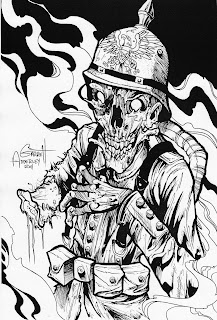 Darkslinger Comics and Azurek Studios present Zombie-O-Rama, the Who Will Save the World? Pin-Up Contest.


Who Will Save the World?

32 page black and white one-shot
The Western Front. September 12, 1914. It’s early morning in the French trenches. Two soldiers eat as rain drowns the land. A strange green cloud covers the land as the sun rises. The smell of death grows as a sinister shadow is cast upon the trenches: the Germans are attacking. The French quickly arm themselves and open fire on the approaching enemy soldiers, but their bullets might as well be spit balls. The German soldiers who do fall, rise instantly and continue their approach. What ensues is a morning of massacre, the French had no chance. When the Medical teams arrive, all that remain are pieces of what were once soldiers: devoured by an unknown weapon.
As the French tend to their dead, the Germans are just a few miles outside of Paris.  The Germans have harnassed a chemical formula that instantly revives their fallen soldiers. Germany now holds the most dangerous weapon on the planet. They call their new army "The Green Skull." It doesn’t take long for Germany to overwhelm and overthrow all of France and Italy, the rest of Europe is next.

The Empire is winning this war and now they prepare to take Britain. In an attempt to combat the quickly approaching attack, Britain calls on the US for assistance.
Darkslinger Comics and Azurek Studios want you to create a Pin-Up image related to content from Who Will Save The World? The artwork must be submitted in black & white or gray scale. The finalist will have their Pin-Up printed in a special gallery section in the back of Who Will Save The World? Send all entries to contest@darkslinger.com by March 25th, 2011. Anyone is welcome to submit. Winners will be announced on March 30th, 2011.

The Fine Print: Once submitted, all artwork becomes the property of Darkslinger Comics. You must own all rights to all Entry Materials submitted by you. All Entry Materials must be original works of authorship on your part that have not been copied, in whole or in part, from any other work and do not violate, misappropriate or infringe any copyright, trademark or other proprietary right of any other person or entity.
Darkslinger Comics first hit the scene in 2006 with Ghost Assassin. Since then, we have gone on to publish Chornicles of Van Helsing, El Bovine Muerte, The Principalities as well as several other titles. To learn more about Darkslinger please visit http://www.darkslinger.com/

Azurek Studios was born in 2000, and was the brain child of Stefano Cardoselli and Rita Gorgoni. 2011 and 2012 will see more than ten titles published by Darkslinger Comics and Azurek Studios. Azurek has also worked with Heavy Metal Magazine, 2000 AD, Blue Water Comics, WarriorInnKeeper Comics and more. To learn more about Azurek, please visit http://www.azurekstudios.com/
Posted by Adam Watson at 12:48 PM No comments: