Christmas Cards of the Past

Since 2008 Darkslinger Comics has created a Christmas Card that we give out to our fans, friends and retailers.  We were unfortunately not able to produce a card in 2014 or 2015 because of time constraints.  We are currently in the process of sorting out the various ideas for what the 2016 card may be so that we do not have a repeat of this in the future.  As it is now officially Christmas Eve I thought it may be fun to take a look back at our holiday cards of the past. 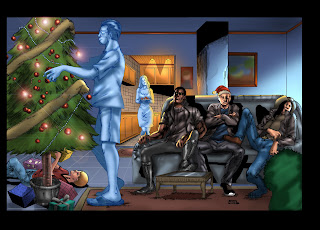 2008 card.  For this card I wanted to showcase the Darkslinger Comics as a slightly dysfunctional family, pitting them together in a way they had never been shown before.  It features David, Todd, Melissa and Scotty from Ghost Assassin; Malcolm from The Pauper and Robert Van Helsing from the Chronicles of Van Helsing.  This was the second time Robert had been illustrated and predates his first comic appearance in Chronicles of Van Helsing #2.  This was illustrated by Bruno Oliveira. 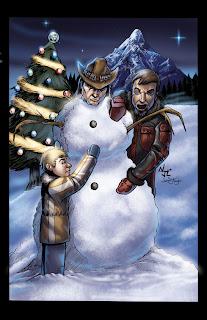 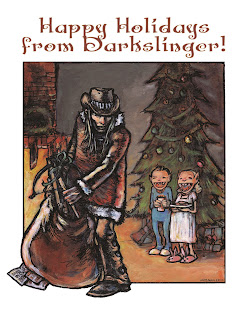 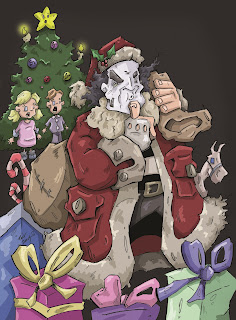 2011 card.  This card features Le Mime as Santa delivering presents to 2 shocked children.  This was clearly not the Santa they were expecting.  This card was fully illustrated by El Bovine Muerte artist, Paul Johnson. 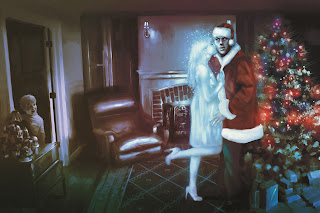 2012 card.  This card features David, Melissa and Scotty from Ghost Assassin.  This card is a take on "I Saw Mommy Kissing Santa Claus".  It was fully illustrated by Diary Of A Dead Man illustrator, Marco Roblin. 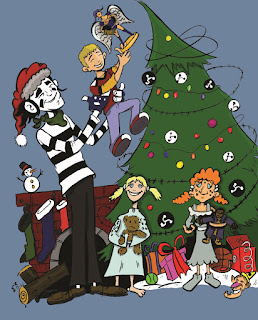 2013 card.  The card has several Darkslinger elements in it.  Le Mime is holding Scott (from Ghost Assassin) as he places an angelic topper on the Christmas tree.  The topper is Prosien from the Principalities.  The Christmas tree features several Darkslinger logos on the ornaments.  In front of the tree are Sally with Mr Muffkins from Chronicles of Van Helsing and Bethany from El Bovine Muerte.  Bethany is holding a plush toy of The Pauper.  This card was fully illustrated by George Leon.

Posted by Adam Watson at 3:21 AM No comments:

A Return To Our Roots...Of Sorts 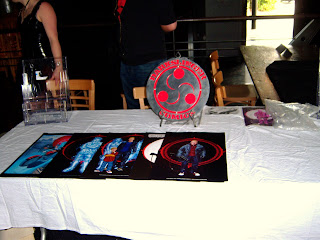 I have been a comics re-seller longer than I have been a comics publisher.  In fact, the first convention I ever tabled at, clear back in 1999, was as a re-seller.  The first show that I sold products created by Darkslinger Comics didn't come about until 7 years after that.

In 2006 I debuted Ghost Assassin: Prelude at the Eugene Comic Con.  Not knowing if I would sell even a single copy of that book I decided to purchase a vendor table instead of opting for artist's alley.  A bit cowardly?  Perhaps, but at the time I couldn't risk all of the gas money and table costs without a definitive plan for making my money back.  I split the table in half, showcasing the small sample of Darkslinger products available at the time on one side while featuring half off graphic novels on the other side while filling the under the table area up with 50 cent comics.  The show turned out great.  I had fun, made money and met some great people (my first meeting of Black Box Comix owner, Alan Bennett, was at this show).  After totaling my earnings I was shocked to discover that I had actually made more off of the Darkslinger Comics products than I did off of the items I brought for reselling purposes.
The next show I did was strictly as a comic publisher and the results were the exact opposite.  Sales were sluggish, the crowd did not appear to be having fun and worst of all the con runners kept turning the lights off in the area we were in.  At the end of the 2 day show I hadn't cleared enough to pay the parking expense let alone the table and gas costs. This made me question everything about being a publisher and a writer, but in the end it did not deter me.  More than anything else it made me question where I fit in this industry.  The only way to answer that was to get out there and do more shows.
Over the course of the next year I did shows and signings at the rate of about 1 per month.  Sometimes these shows were as a retailer, sometimes as a publisher.  When I was showing primarily as a re-seller I would still stock at least a quarter of the table with wares created by Darkslinger Comics.  Results varied but more often than not I was coming out ahead, making new friends, making new contacts, making new fans and overall having a good time.
In 2010 I did a record making (in my head at least) 42 shows and signings in a one year period.  To say this left me completely exhausted would be a severe understatement.  I didn't just have con fatigue, I had total con burnout.
2011 was a hard year.  The comic industry lost a great talent and I lost my best friend, Ty Wakefield.  It was in this year that I decided to majorly cut back on the amount of conventions I was doing.  Since then I have done a small smattering of shows as a publisher but only one as a vendor.
Over the last few years it seems like things have gotten off track.  While I am still completely committed to Darkslinger and to doing everything in my power to make this insane dream a reality things have felt disconnected somehow.  So starting today I am taking a small step towards getting things back to where they should be by returning to what I did in the beginning. I will be tabling today at the Twin Oaks show happening at Mall 205 in Portland, Oregon.  And I will be doing it as both a vendor and a publisher.  This is the first in what will hopefully be a string of conventions we will be exhibiting at over the next year.  I know that doing it as a re-seller is cheating a little, but sometimes you need to bend the rules in order to get where you need to be.
Stay tuned as future blog posts will be discussing our titles and when you can expect to see more of them.  If you are in the Portland area please consider coming by the show.  There will be several vendors selling various collectibles including comics, trading cards and action figures.
Posted by Adam Watson at 6:02 AM 1 comment:

Darkslinger Comics is having a Black Friday (through Cyber Monday) sale on nearly every product in our store!  You can save up to 67% on in stock products, starting at just 99 Cents.   Visit now for these deals: 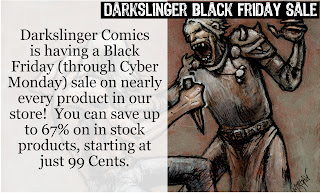