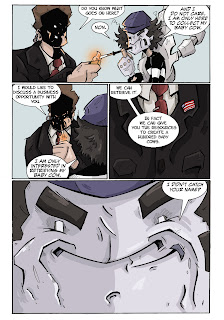 Summary of El Bovine Muerte:
A story about a cow...but not just any ordinary cow, this is a genetically altered cow that has been created in a secret lab overseen by a delusionally mad mime on his quest to create the world's most perfect cheese.  However, the cheese has dangerous side effects and now a war has errupted to control the power of the cheese.  Will all of humanity suffer due to one mime's persuit of happiness?
El Bovine Muerte is a totally free webcomic that currently features over 70 pages posted.

Darkslinger Comics first hit the scene in 2006 with Ghost Assassin. Since then, we have gone on to publish Chronicles of Van Helsing, El Bovine Muerte, The Principalities as well as several other titles. To learn more about Darkslinger please visit www.darkslinger.com
Posted by Adam Watson at 8:36 PM No comments:

Who Will Save The World? Kickstarter 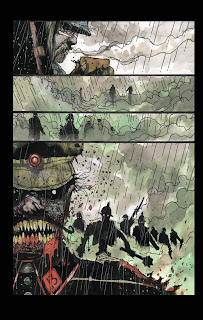 Big Wow, El Bovine Muerte and Who Will Save The World?

We will be at the Big Wow Comic Fest this Saturday and Sunday in San Jose, CA.  Visit us in the exhibitor's area.  www.bigwowcomicfest.com

El Bovine Muerte is up to Page #7 from Chapter 3 (over 60 pages now posted, completely free to read!)
www.darkslinger.com/elbovinemuerte


Who Will Save The World? is going strong on Kickstarter, but we need your support to make our goal!  We have some great incentives starting at just $1!  http://kck.st/HOWleb


Adam Watson (Owner of Darkslinger Comics) was recently interviewed by Lip Service podcast.  To hear the interview click the following link: http://kissmecomix.com/podcastgen/download.php?filename=2012-05-13_lipservice24.mp3
Posted by Adam Watson at 3:34 AM No comments:

Adam Watson and Tony Morgan will be signing today at Cosmic Monkey Comics in celebration of Free Comic Book Day from 11 to 2.  Stop by and get some great comics!
Posted by Adam Watson at 1:54 AM No comments:

Who Will Save The World? Press release

FOR IMMEDIATE RELEASE
WHO WILL SAVE THE WORLD? ON KICK STARTER

04.24.2012  Molalla, OR-Darkslinger Comics and Azurek Studios are campaigning on Kickstarter for financial backers to bring Who Will Save The World? to life in print. Your contribution will fund printing and marketing costs for Who Will Save the World? a 52 page Color one-shot, written by Rita Gorgoni and illustrated by Stefano Cardoselli. Any surplus of funds will be used for development and production of other Darkslinger Comics and Azurek Studios collaborations.

This is your opportunity to fund a massacre and the war that follows.  Spoils from this war include  a limited edition trading card, becoming a soldier/zombie in the comic, original artwork, a variant cover, a hardcover, a limited edition statue, the comic itself and much more.  Click the link at the bottom by June 19th, 2012 to submit your pledge.  Some options have limited availability and will sell out quickly.

Summary of Who Will Save The World?:
The Western Front. September 12, 1914. It’s early morning in the French trenches. Two soldiers eat as rain drowns the land. A strange green cloud covers the land as the sun rises. The smell of death grows as a sinister shadow is cast upon the trenches: the Germans are attacking. The French quickly arm themselves and open fire on the approaching enemy soldiers, but their bullets might as well be spit balls. The German soldiers who do fall, rise instantly and continue their approach. What ensues is a morning of massacre, the French had no chance. When the Medical teams arrive, all that remain are pieces of what were once soldiers: devoured by an unknown weapon.
As the French tend to their dead, the Germans are just a few miles outside of Paris. The Germans have harnessed a chemical formula that instantly revives their fallen soldiers. Germany now holds the most dangerous weapon on the planet. They call their new army “The Green Skull.” It doesn’t take long for Germany to overwhelm and overthrow all of France and Italy, the rest of Europe is next. The Empire is winning this war and now they prepare to take Britain. In an attempt to combat the quickly approaching attack, Britain calls on the US for assistance.  Who Will Save The World from this undead army?

Click the link for more information and to support Who Will Save The World? on Kickstarter:

Darkslinger Comics first hit the scene in 2006 with Ghost Assassin. Since then, we have gone on to publish Chronicles of Van Helsing, El Bovine Muerte, The Principalities as well as several other titles. To learn more about Darkslinger please visit www.darkslinger.com

Azurek Studios was born in 2000, and was the brain child of Stefano Cardoselli and Rita Gorgoni. In addition to their work with Darkslinger Comics, Azurek has also worked with Heavy Metal Magazine, 2000 AD, Blue Water Comics, and WarriorInnKeeper Comics.  Darkslinger Comics and Azurek have worked together on the Chronicles of Van Helsing, 100 Points of Hate and Down Stone Cold. To learn more about Azurek, please visit http://www.azurekstudios.com/


Please feel free to repost this.
Posted by Adam Watson at 6:34 PM No comments:

Who Will Save The World? Now on Kickstarter! 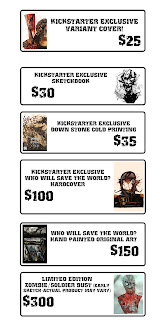 Darkslinger Comics and Azurek Studios are raising funds for the printing and promotion of Who Will Save The World? on Kickstarter.  You can help out by going to: http://kck.st/HOWleb
By donating you can get some great incentives like a limited edition Bust, an original page, a Kickstarter Exclusive Hardcover or even be drawn into the book as a Zombie!  These are just some of the great incentives we are offering!  If you would like to help, but can't afford to make a donation, please consider sharing the link of Facebook, posting about it in your own blog or tweeting a message on Twitter.  Your help and support is appreciated!
Posted by Adam Watson at 11:37 PM No comments:

This Saturday and Sunday (March 10th and 11th) Darkslinger Comics will have a table at the Portland Raining Stars Show (http://www.rainingstarsshow.com/)  The show will be located at the Columbia Blvd Holiday Inn convention center in Portland, OR

We have now been confirmed for Emerald City Comic Con at the end of the month, March 30-April 1st.  If you do not already know, ECCC is the biggest comic convention in the Pacific Northwest.  It will be located in Seattle, WA.  To learn more about this show, visit: http://emeraldcitycomiccon.com/
Posted by Adam Watson at 11:13 PM No comments: